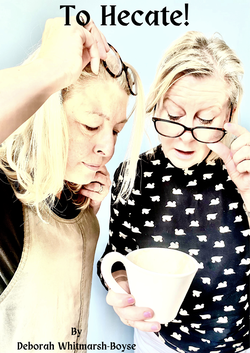 5th October at 7pm
6th October at 7pm
​Tickets: £10 | Concessions: £7
​Running Time: 50 minutes
12+ strong language
Book Now
Sue and Di have been friends for years, sharing in the exuberance of their youth, and supporting each other through the ‘family’ years. Once party girls, they are now party to each other’s unhappy worries about aging. The ‘hot flush’ years are taking their toll; things change, but the shifting sands on which they now stand are unfamiliar and unsteady. They were once warrior goddesses but now they are invisible. Seen only by the witches who follow them and lure them to the fringes, intrinsically ambivalent and polyamorous, they are forced to straddle conventional boundaries and elude definition. But straddling takes its toll, and they can both see the fault lines edging closer to their feet. Perhaps it’s easier to just burn. Sue leaves a job she loved, was good at, but when the brain fog makes decision time an impossible task, maybe it’s to get out. To add insult to injury, when your leaving gift is a Cath Kidston rose paisley garden kneeler and gardening gloves set, a rambling rose called Minnehaha and a year’s supply of seeds, you wonder if they ever really knew who you were.
​
‘To Hecate!’ is a wry look at aging, the process of drying out, and knowing that some are happy to watch you being left out to dry. In the grip of menopause Sue asks: “When did I become someone who needs so much supplementation?” Are we damaged as we age? Worth less? If experience is worth it’s weight in gold, surely that’s a weighty millstone to bear? How can women bear what Shakespeare referred to as ‘the hideous winter’? As they chat over coffee and move onto wine, the clarity becomes heart-breaking. Because we all succumb to the moon in the end; ultimately, we’re all like Hecate, standing at the crossroads and trying to hold our torches high … to see, and be seen.